This Week in Boston

There were 18 in our Sunday morning fellowship, and because of the Thanksgiving holiday there were only three Bible studies during the week. Yet the week was full of blessing. There were 27 people in our second International Thanksgiving Dinner. This was not as many as the first dinner, but the night turned out to be a very successful evening. Our neighbor from Nepal, his family and two friends were in attendance. We have been praying for this family for several years. The teenage son of this Nepalese family became a Christian in one of our summer vacation Bible times several years ago. The father of the Nepalese family had been in several services last Spring, but because of a busy schedule he has not been in attendance since May. This is an immigrant family and they work several jobs to make enough money to live. In the two Thanksgiving dinners, five distinctive civilizations were represented: Buddhist, Sinic (Chinese), Western, African, and Islamic. The world may be divided into ten major civilizations or mega-worldviews. It is our intention to develop a model church consisting of all ten civilizations. Our hope is that our current church plant will be a model for other churches to study as they seek to minister in similar situations. A second wonderful blessing is contained in an email that I received last evening from an Iranian named Mohammad (he attended the dinner last week). He apologized for not coming to our services this week—he has the flu. He then went on to tell me that he has researched our ministry on the Internet. By doing so, he learned quite a bit about our history and that history has, in some way, interested him in the Christian message. Here is just a little of what Mohammad wrote to me, “Whether I convert to Christianity or not, I will be glad to learn from you a lot of things not only about the Christianity, but also about the culture of your great country although as I said before, even now I believe in most parts of your religion, believe in your God, consider Bible a holy book, and respect to the values like democracy or freedom of speech that American people respect to them also.” Please pray for Mohammad. I included a picture of our Friday night Bible study which was the third major blessing of last week. One of our disciples leads this study. It is indeed a joy to listen to him declare the Word of God to other Chinese graduate students. Joelle, who will be returning to Iowa this week, is also in the picture. She will be missed by everyone in our fellowship. One of our young disciples asked if we could not find someone else like Joelle who would come and help her know how to walk with God. Please pray that our Father will speak by means of the Holy Spirit and the Word of God to individuals like Joelle who are willing to love people in Boston. 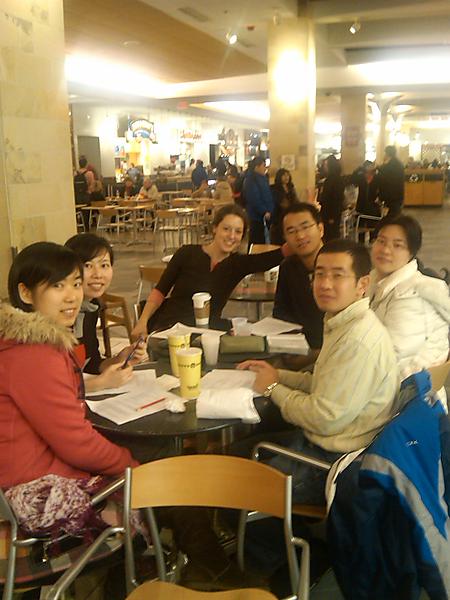